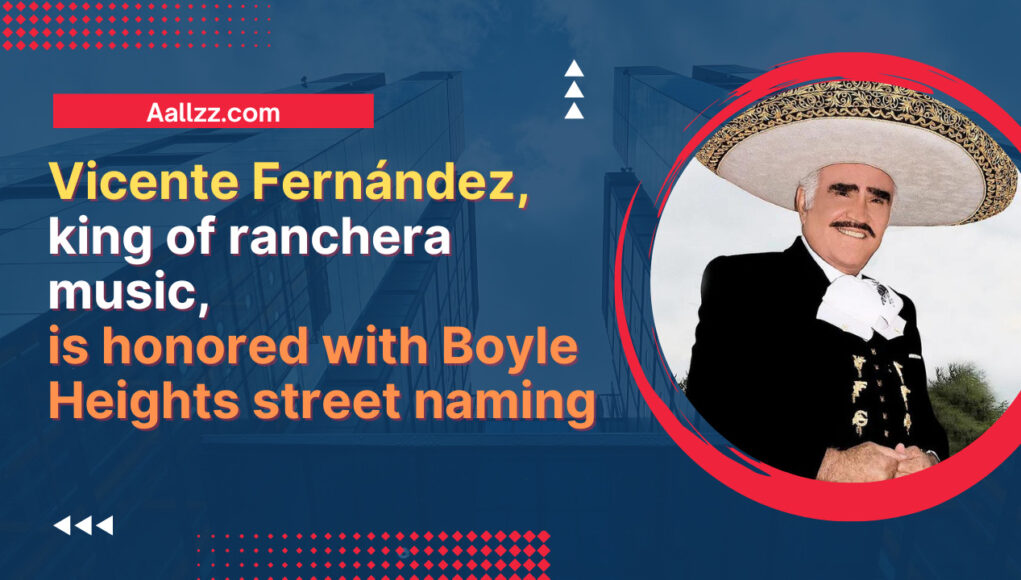 Tricolored Mexican flags and festive green, white and red papel picado decorations adorned Mariachi Plaza, where a crowd of roughly 300 visitors was serenaded by live musicians and on loudspeakers.

Fernandez’s widow, Maria del Refugio Abarca Villasenor, known as “Dona Cuquita,” traveled to Los Angeles from her home near Guadalajara to celebrate with the crowd and vicente fernández grandchildren.

“My husband would have been very proud and always loved his fans and the community of Los Angeles,” Villasenor told reporters as she headed to the plaza. “My family is touched by this recognition.”

Los Angeles experienced an outpouring of grief when Fernandez, known for his romantic rancheras and timeless folk anthems, died Dec. 12 at the age of 81.

Droves of fans — new generations joining veterans — connected with Fernandez over the years, thanks in part to his unflinching nature. As Mexican artists began to sing in English to reach a wider audience, Fernandez continued to belt out his romantic ballads in Spanish. The singer often embarked on grueling tours across North America, promising to play for his fans “as long as they would listen.”

A career that started on the streets of Guadalajara spawned more than 50 albums, two dozen films, three Grammy Awards and eight Latin Grammys. Mexico City’s Estadio Azteca, the largest stadium in the country, was the site of Fernandez’s final live performance in 2016.

Beyond the prizes, his legendary songs “La Ley Del Monte” and “El Rey” were the anthems and party-closing signals for countless immigrants and native-born and second-generation Latinos in Southern California.

“Look at my playlist: Vicente Fernandez makes up 80% to 90% of my songs,” said Los Angeles mariachi Cesar Gutierrez, 51, a native of Fernandez’s Guadalajara who played Friday at the plaza. “His music is full of emotion — love, sadness, joy and hope — he gave us all those things during his life.”

In the aftermath of his death, Los Angeles mourners flooded the sidewalk with candles and flowers around his star on the Hollywood Walk of Fame, and gathered at Mariachi Plaza to grieve the loss of a superstar they called by his nickname, Chente.

“If you’re Mexican, Vicente Fernandez was either on in your house, your neighbor’s house, on your tia’s radio or somewhere,” said Victor Lugo, 43, of Baldwin Park, who came to Mariachi Plaza on Friday to see the name change and celebrate the legacy of the man whose voice was always present at “countless parties.”

“My last memory of Chente was watching TV and hearing about his death,” Lugo said. “It’s nice to replace that.”

The motion met some unexpected turbulence when members of the Boyle Heights Neighborhood Council objected; they were upset they had not been consulted

Several members of the Boyle Heights community, however, argued in support of Fernandez at a neighborhood council meeting Jan. 26. More than 30 members of the public spoke in favor of the renaming, with six opposed.

“The community was always overwhelmingly and passionately for the renaming of Bailey Street for Vicente Fernandez, especially adjacent to Plaza Mariachi,” De Leon said. “This is the largest concentration of Mexicans in the United States. This is what they wanted.”

The length of Vicente Fernandez Street stretches about 400 feet from the edge of Mariachi Plaza to the gates of Adventist Health White Memorial Hospital.

Fernandez is the second ranchera legend whose name graces Bailey Street. Pioneering singer Lucha Reyes has a statue in Mariachi Plaza and signs along Bailey Street, placed in 2014.